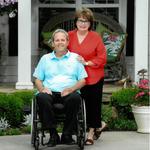 Bryan E. Hayes, former dairyman, retired postal carrier, and lifelong Midlothian resident passed away on November 9, 2020, at the age of 75. Born September 2, 1945, in Waxahachie to Lon Earl and Mary Wacile (Springer) Hayes, Bryan graduated from Midlothian High School in 1964 and the University of Texas at Arlington with a bachelor's degree in 1969. He was soon drafted to the U.S. Army and stationed at Fort Hood, but not before marrying his high school sweetheart, Brenda (Barham) Hayes on November 15, 1969. Bryan was known in the community for his tireless work ethic in both the dairy business and postal service. However, his true legacy will be his undying love for his family, which came only second to his love of the Lord. He proudly served for many years at Shiloh Cumberland Presbyterian Church in Ovilla as a Sunday school teacher, deacon and Elder. Despite the diagnosis of a debilitating autoimmune disease in his 30s, his unwavering positivity was an inspiration to all who knew him. Bryan is survived by his wife of 51 years, Brenda (Barham); his children, Brandon and wife Candace Hayes; Ashley (Hayes) and husband James Davis; Lynsey (Hayes) and husband James Purl; his seven grandchildren, Braxton Hayes, Ashton Lackie, Jayden Hayes, Lillian Hayes, Ava Purl, Hudson Purl, and Collins Purl; loving aunt, Danetta Chapman; siblings, Markland Hayes, Sharrell Gray, Johnny Grant, Joyce Curtis, and Brian Lee Grant; brother-in-law, Barry Barham and numerous nieces and nephews. He was preceded in death by his parents, Lon Earl and Mary Wacile (Springer) Hayes and Rowena Frances (West) Hayes; his sister, Betsy Grant; and his brother, Lonquist Hayes.