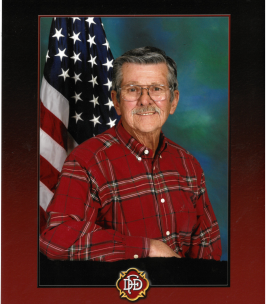 Don was the eldest son. There were five children from this union which included: Betty, Don, Terry, David and Dora. He and his family lived in and around Selmer, Tennessee until his parents divorced in 1950. His mother was remarried to Ted Tedford, from that union; Don gained four more siblings which include Kenneth, Sandra, Mary Bess and Robert Claude.

In 1953, his family moved to Dallas, where he graduated from South Oak Cliff in 1956. Don joined the US Marine Reserves in 1955. In 1959, he started his 30 year career as a Dallas Firefighter. Serving his fellow firefighters as President of the Dallas Local starting in 1972, and then as President of the TSAFF from 1983-95. In 1997, he started working for the Midlothian ISD Transportation Dept. as something to do, and stayed for 15 years. He was also a Texas Mason of 60 years, and, after 55 years, he served as a Worshipful Master in 2017.

Don died on May 11th surrounded by family and loved ones. He rejoined his parents Bessie Cox and Grady Greene; his first wife Mary Levy and their youngest son David Michel (Mikey); his sisters Betty, Sandy and Mary; and his brother Robert as well as numerous other family, friends and golf buddies.

He was survived by his wife of 49 years Peggy; his children: Melanie Killian of Oak Leaf and her husband Robert; Joseph of Houston and his wife Cyndi; Karen Hodge of Midlothian and her husband John; and Wesley of Midlothian. He is also survived by his sister Dora Ivey of Memphis, Tenn. Brothers: Terry Greene and his wife Judy of Duncanville, Texas ; David Greene of Memphis, Tennessee; Kenneth Tedford of Erwin, Tennessee; and Mark Turner of Dallas, Texas. Don has 10 grandkids: (Melissa-Jennifer-John –Allison Killian; Claire-Jacob-Jillian Greene; and Blake-Amanda-Kelsey Hodge) ,12 great grandkids, and numerous nieces and nephews and other children that he cared so much about, who will all miss their Uncle Duck and Papa Duck.

In lieu of flowers, please donate to the Dallas Firefighters Museum, the Leukemia Research Foundation, or the charity of your choice.