To share your memory on the wall of Eddie Bryant, sign in using one of the following options:

Print
Eddie Eugene Bryant, age 61, passed away on Friday, February 26, 20121 after a lengthy battel with Congestive Heart Failure. He passed peacefully, drifting to sleep in the presence of his family.

Eddie Eugene Bryant was born May 31, 195... Read More
Eddie Eugene Bryant, age 61, passed away on Friday, February 26, 20121 after a lengthy battel with Congestive Heart Failure. He passed peacefully, drifting to sleep in the presence of his family.

Eddie Eugene Bryant was born May 31, 1959 in Dallas, TX to George Clayton and Martha Joann (Anderson) Bryant. He graduated from Duncanville High School in 1978 where he took a particular interest in building trades, woodshop, and work study programs (CVAE). This benefited him throughout his professional career. Eddie married Mylinda Martin June 16, 1979. They had a wonderful marriage for 35 years and remained friends until his final breath. They were blessed with two amazing children, Shelby Diana and Ethan Matthew. Eddie supported his family through his mechanical ability, working at multiple shops until finally owning his own. Eddie also developed many friendships due to his love of automotive mechanics and restorations. He never refused to lend a helping hand to fix things for anyone in need. When Eddie wasn’t busy turning wrenches, he could be found coaching various sports, supporting and mentoring his children, or filling his cooler with bass on one of the local lakes. He also loved hunting season and enjoyed the time at the deer lease with his dad and his son.

He is survived by his parents, Clayton and Joann; his children, Shelby and husband James Meador, Ethan and girlfriend Makayla Lattimore; his grandchildren, Jaimee, James Jr. and Sullivan; and many nieces and nephews.

He is proceeded in death by his brother, Charles Ray and sister-in-law, Melinda.
Read Less

To send flowers to the family or plant a tree in memory of Eddie Eugene Bryant, please visit our Heartfelt Sympathies Store.

We encourage you to share your most beloved memories of Eddie here, so that the family and other loved ones can always see it. You can upload cherished photographs, or share your favorite stories, and can even comment on those shared by others.

The Ivers Family sent flowers to the family of Eddie Eugene Bryant.
Show you care by sending flowers

Posted Mar 03, 2021 at 05:19pm
Bryant Family, Please k ow that you are in our thoughts and prayers at this most difficult time. Since,

The Ivers Family purchased flowers for the family of Eddie Bryant. Send Flowers

Posted Mar 02, 2021 at 02:25am
Eddie helped me with my car, several times, and taught me how to fix things I hadn't learned before on it.
He was a good friend to my mom, Jean. I remember once, when he and my mom were trying to get his truck out of the mud in our yard.
It's funny to watch the video, but they finally got it.
I'll remember the dinners and funny conversations we'd all have while eating, and settling who would get the last of something.
I'll miss the random drives down unknown roads, with no destination. We'd all load up in the truck, and find some beautiful views, weird houses, and lots of dirt roads.
Good memories. My heart goes out to his family, and I serve my condolences. I wish we could make it to the service, but my car broke down 2 days before the winter storm, so I don't have a way. 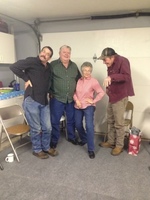 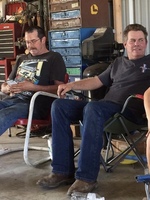 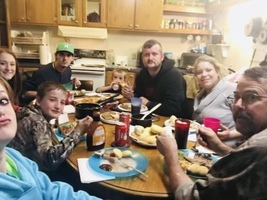