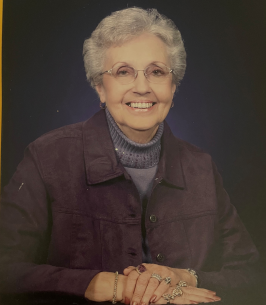 Frances Loree Witherspoon Morgan was born to O.A. and Myrtle Witherspoon on November 28, 1927 in Ferris, Texas. She spent her early years in Ferris, attending Ferris schools through the ninth grade. She was a drummer in the Yellowjacket band. During her ninth grade year, her family moved to Dallas. In order to finish the school year in Ferris, Loree moved in with her grandparents, Tom and Alice Hall in India, on the eastern edge of Ellis County. The Halls had neither electricity nor running water. She nightly studied by coal oil lamp. On weekends, she took the train to Dallas to be with her family. After a year of commuting, she moved to Dallas and finished her education at Forrest Avenue High School.

In 1946, she met the love of her life, Eldon Morgan, not surprisingly, at church. They were married in Ennis Texas on September 18, 1947, and afterwards they moved about halfway in between Mountain Peak and Griffith Switch. There Eldon sharecropped land adjacent to his parents’ farm.

Although Loree wasn’t unfamiliar with farm life, she had no idea just what she didn’t know. She and Eldon hoed weeds in the cotton patch, side by side. When it came time to “strip” the cotton, Eldon asked her if she thought she could drive the pickup and pull trailer loads of cotton to the gin. He may have phrased it as a question, but it wasn’t really. She did it. That meant, pulling a 15 foot trailer loaded with a couple of tons of cotton out of a field and onto a single lane gravel road. That gravel road was only about 3 miles long, but it traversed two single lane wooden bridges along the way.

That’s just the first of a series of things Loree tackled without fear. In 1958, she and Eldon bought a dress shop in Midlothian, the Fashion Shop. Loree has zero experience in retail, either in sales or ownership. She learned quickly and fearlessly. A few short years later, they bought a store about two doors down that carried a variety of clothing and dry goods. Those two stores combined to become Morgan’s Department Store. Morgan’s expanded Loree’s business to include not only dresses and jewelery, but also foundation garments, men’s clothing, shoes, sheets, towels and whatever else might strike her fancy. Loree’s foray into retail was highly successful. She regularly had customers come from all over the area to shop.

At the height of her retail career, in 1963, it became necessary to add a baby department to the store, mainly because the added a baby at home. Tammie actually did complete the set. So, for the next six years or so, Loree juggled the responsibility of a career, raising a toddler and chasing two teens. Finally, in 1969, Eldon asked her to walk away from the store, and they sold it.

If there was one thing other than her faith, and love for Jesus Christ that she modeled for her children was that she/they could face anything without fear. No challenge was too daunting, no obstacle too big, the unknown was only unknown for a short time. She modeled grit and determination along with grace and poise. She was June Cleaver in real life.
Loree spent her entire life as a member of the Church of Christ with over 60 years of that life at the Midlothian Church of Christ. After her move to Lubbock in 2017 to live with Vickie, she attended Greenlawn Church of Christ. She loved it, but her heart never left Midlothian.

She left this earth on May 4, 2022 to join Eldon and her Messiah in Paradise to patiently await the resurrection when she will receive a glorious new body as heaven and earth are reunited as God intended from the beginning.
She leaves behind three children, Ron Morgan (and Julie), Vickie Morgan Turner (and Rex), and Tammie Morgan Moore. There are six grandchildren: Shawna Turner, Kyle Turner (and Bridgett), Noah Turner, Jenni Morgan Rogers (and Nick), Mo Moore, Hunter Mitchell, and honorary grandson Drew Johnson (and Miranda). The great grandchildren include, Braxton Turner, Brody Turner, Kamri Turner, Klaire Turner, Emma Turner, Hayden Hunter, Peyton Hunter, Rebel Phillips and Austin Johnson.