In Memory of
Jerry Donnis
Sanders
1936 - 2022
Click above to light a memorial candle. 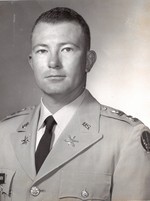 Jerry Donnis Sanders, 85, went to be with his Lord and Savior on January 21, 2022 after a courageous battle against Alzheimer’s Disease.
Jerry was born August 5, 1936, in Shreveport, LA. After an adventurous childhood in Shreveport along the Red River, Jerry graduated from Bossier High School in 1955. That August, he met the love of his life, Sandra. Jerry attended LSU in the fall of 1955 and played in the marching band. The following year he transferred to Northwestern State University where he joined the Army ROTC. In December 1959, he and Sandra were married. In 1961, Jerry earned his Bachelor of Science in Biology. He immediately went into the US Army where he served in Germany, Alaska, Vietnam and postings around the United States working in the Air Defense Missile Division. He retired at the rank of Major, August 5, 1996 after 35 years of service to his country.
When he was placed on reserve duty in 1972, he moved the family to Richardson, TX where he and Sandra raised their 4 boys. In April 1973, he started a second career working for the City of Dallas as code enforcement but quickly found his niche as a Construction Superintendent building facilities such as fire and police stations, convention centers and city buildings. He retired from the City of Dallas in October 1996 after 23 wonderful years. Because of his expertise in construction during this time, Jerry was a professor at Dallas County College teaching Construction Management classes on nights and weekends.
Along this journey were the two most important forces that shaped Jerry, his savior, Jesus Christ, and his wife of 62 years, Sandy. Sandy was always right beside him raising 4 boys during all his deployments and right beside him when they were able to start attending church regularly at Holly Drive Baptist Church in Richardson and then at Prestonwood Baptist Church in Dallas during its infancy in 1980. They quickly became very active members in the choir and Jerry also a Deacon. The church was a second home to them and the boys for many years, sometimes 3-4 times a week especially during Easter and Christmas where Jerry and Sandy were part of the well known Prestonwood holiday performances. Their relationship with the Lord is rock solid and they were determined to raise their boys in this fashion.
Jerry also loved his friends, building, gardening, fishing, hunting and the game of golf. He lived a full life and now rejoices with his Lord.
He is survived by his wife, Sandra Sanders; two sons; John Sanders of Prosper and Matt Sanders of Midlothian; grandsons, Brice Sanders of Seattle, Grant Sanders of Plano, Dawson Sanders of Midlothian, and grand-daughters, Maracyn Sanders of Prosper and Maddie Sanders of Midlothian, sister Charlotte Lyle of Humble. Preceded in death by sons, Steve Sanders of Allen and Scott Sanders of Plano.
Visitation will be at 10:30am, followed by a Memorial services to be held at 11:30am, February 7, 2022 at First United Methodist Church of Midlothian with burial at DFW National Cemetery following. In lieu of flowers, donations may be made to the Alzheimer’s Association.

To send flowers to the family or plant a tree in memory of Jerry Donnis Sanders, please visit our Heartfelt Sympathies Store.