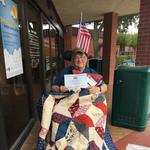 Richard Winland served this country for over 33 years. Proving serve to this country was his only paying job. He loved and cared for his family his whole life. He enlisted in the U S Air Force at a young age right after WWII. Dick, as he was called by friends and co-workers, changed to the US Army to become a warrant officer and retired as a CW4. After serving in the military, he served another few years in the Federal Aviation Administration investigating aircrafts and accidents. He served several tours in war zones in both Korea and Vietnam. Receiving numerous accommodations, including the Purple Heart. He lived his last few years in the CLC at the Dallas VA where he received quality care and was able to spend time with fellow veterans. He died after contacting COVID while in quarantine in his room and was quickly transferred to acute care where he lost this last battle on November 10, 2020. He is survived by his daughter, Cathie King - spouse Henry and son Ross Winland - spouse Chris along with their families. Dick was proceeded in death earlier this year by his wife, Virginia of more than 60 years and his son Richard Winland Jr.