In Memory of
Wesley Etharidge
Vaughan
1925 - 2021
Click above to light a memorial candle. 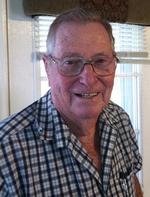 Wesley Etharidge Vaughan was born December 9, 1925 in Petty’s Chapel, Texas and died at the age of 95 on April 10, 2021. Preceded in death were his wife of over 60 years-Martha Lavada Henley Vaughan who he married in November of 1946; his parents; Wylie Wesley Vaughan and Sirlina Lorine Crawford Vaughan of Corsicana; two brothers-Wylie Vaughan, Jr. and William Douglas Vaughan; two sisters-Lorine Gaston and Mary Ruth Vinson. Wesley is survived by two daughters- Glenda Edwards (spouse Bill Edwards) of Allen and Rhonda Hagan (spouse James Hagan) of Midlothian; four grandchildren-Misty Edwards Smith (spouse Brad Smith) of Allen and Farrah Edwards Couch (spouse Chris Couch) of Rowlett, Zachary James Hagan (spouse Brooke Hagan) of Midlothian, Garrett Wesley Hagan of Midlothian; two great grandchildren-Kaylee and Jake Smith, both of Allen. He is also survived by two sisters-Margie Gaston Brown and Irene Terry Brown, and many nieces and nephews who called him Uncle Son.
Wesley joined the Army in 1944 and was honorably discharged in May 1946 as Sergeant after serving during WWII in the Philippines as a telephone/telegraph lineman. Upon returning to Texas and moving to Dallas, he started working as a stockman and later a small appliance repairman at Sears, Roebuck and Co. After 40 years of service, he retired. While living in Duncanville, he was ordained as a deacon at Northside Baptist Church. Also, from the 1950’s he was the owner of Vaughan’s Lawn Service. His many clients appreciated his love of a well-groomed lawn. He hired many people to work part-time for him. He modeled being a hard-worker and devoted extensive hours to earning money for his family. He graciously shared his money to help pay for college expenses for his daughters, son-in-law, and grandsons. In his free time, he liked to fish and deer hunt. He especially enjoyed going to his land in Carbon. Known as “Pappa” to his grandchildren and great-grandchildren, he was a proud man who shared his love of flowers, trees, and landscaping.

To send flowers to the family or plant a tree in memory of Wesley Etharidge Vaughan, please visit our Heartfelt Sympathies Store.