To share your memory on the wall of Pat Lewis, sign in using one of the following options:

To send flowers to the family or plant a tree in memory of Pat Lewis, please visit our Heartfelt Sympathies Store.

We encourage you to share your most beloved memories of Pat here, so that the family and other loved ones can always see it. You can upload cherished photographs, or share your favorite stories, and can even comment on those shared by others.

Posted Mar 19, 2021 at 10:57am
Kim and Kerri - I recently saw where you lost both your dear parents in this past terrible year 2020. Please accept our condolences and prayers for you and your family. How wonderful to know where they are and how completely whole and happy they are. - The Wallis Family
Comment Share
Share via:
MT

Posted Oct 31, 2020 at 12:00am
She was always true friend. we shared a lot good times together, cheer leaders in high school, in each other’s wedding. A good example of great Christiian woman.
Comment Share
Share via:
JR

Posted Oct 31, 2020 at 12:00am
I have so many memories of Pat (and I have to include Troy); I grew up knowing, respecting and loving them all through my growing up years in our church. Pat, always the smiling gracious lady who never missed an opportunity to say 'hello, good to see you!' She was such a help to me during my earliest teaching years. As I started my career in MISD, she was in a position to advise and direct me when I had to resign to move away during husband's military obligations. Her advise helped me know the best decisions to make for my 'future retirement' many years ahead. I will forever be grateful for her expertise and care in making certain I knew the options available. Leigh, Jake and Sam may not remember my 'full circle' story that I shared when each was in my 5th grade class at J. R. Irvin: I was so honored to share that not only did their Grandmother Pat have a special place in my life and heart . . . but their GreatGrandmother Evelyn also . . . she was my MHS Senior year Spanish teacher and Senior Class sponsor. That is a 'full circle' memory story I will always remember with love. My heartfelt love and respect to all the Lewis Family, Jeanne Ray
Comment Share
Share via:
VD

Posted Oct 30, 2020 at 12:00am
Pat and Troy are two of the most special people I’ve ever met. Their love for God, one another and all of God’s children was truly evident. I have so many fond memories of visiting with them at church Sunday mornings and at Lord’s Acre. But perhaps my fondest memory is of Mrs. Pat’s beautiful smile. She wore it every time I saw her. And it greatly complimented that of her dear husband’s. It’s such a blessing to know the Lewis’s. They are so very loved and truly will be missed.
Comment Share
Share via:
HS 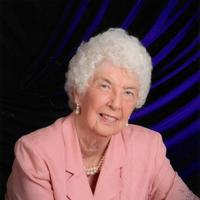